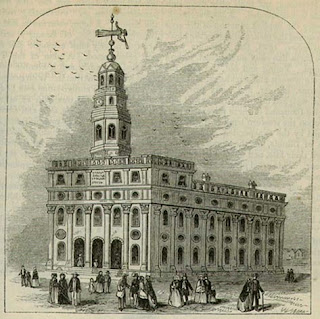 In the immediate aftermath of the martyrdom of Joseph and Hyrum Smith, there was much uncertainty and confusion among the some 20,000 to 30,000 saints living in Nauvoo, IL. Only two of the apostles were in Nauvoo at this time, both witnesses to the martyrdom: John Taylor and Willard Richards. Parley P. Pratt, another apostle, was on his way from Chicago to Nauvoo after learning the news of the martyrdom and was the next apostle to arrive. Parley was trusted by Joseph Smith. He published the following in his autobiography:

"During the two or three days I spent in travelling between Chicago and Peoria I felt so weighed down with sorrow and the powers of darkness that it was painful for me to converse or speak to any one, or even to try to eat or sleep. I really felt that if it had been my own family who had died, and our beloved Prophet been spared alive, I could have bourne it, and the blow would have fallen on me with far less weight. I had loved Joseph with a warmth of affection indescribable for about fourteen years. I had associated with him in private and in public, in travels and at home, in joy and sorrow, in honor and dishonor, in adversity of every kind. With him I had lain in dungeons and in chains; and with him I had triumphed overall our foes in Missouri, and found deliverance for ourselves and people in Nauvoo, where we had reared a great city. But now he was gone to the invisible world, and we and the Church of Saints were left to mourn in sorrow and without the presence of our beloved founder and Prophet.

"As I walked along over the plains of Illinois, lonely and solitary, I reflected as follows: I am now drawing near to the beloved city; in a day or two I shall be there. How shall I meet the sorrowing widows and orphans? How shall I meet the aged and widowed mother of these two martyrs? How shall I meet an entire community bowed down with grief and sorrow unutterable? What shall I say? or how console and advise twenty-five thousand people who will throng about me in tears, and in the absence of my President and the older members of the now presiding council, will ask counsel at my hands? Shall I tell them to fly to the wilderness and deserts? Or, shall I tell them to stay at home and take care of themselves, and continue to build the Temple? With these reflections and inquiries [about the state of the saints following the martyrdom of Joseph and Hyrum], I walked onward, weighed down as it were unto death. When I could endure it no longer, I cried out aloud, saying: O Lord! In the name of Jesus Christ I pray Thee, show me what these things mean, and what I shall say to Thy people? On a sudden the Spirit of God came upon me, and filled my heart with joy and gladness indescribable; and while the spirit of revelation glowed in my bosom with as visible a warmth and gladness as if it were fire. The Spirit said unto me:

"Lift up your head and rejoice; for behold! it is well with my servants Joseph and Hyrum. My servant Joseph still holds the keys of my kingdom in this dispensation, and he shall stand in due time on the earth, in the flesh, and fulfill that to which he is appointed. Go and say unto my people in Nauvoo, that they shall continue to pursue their daily duties and take care of themselves, and make no movement in church government to reorganize or alter anything until the return of the remainder of the Quorum of the Twleve. But exhort them that they continue to build the House of the Lord, which I have commanded them to build in Nauvoo."

"This information caused my bosom to burn with joy and gladness, and I was comforted above measure; all my sorrow seemed in a moment to be lifted as a burden from my back.

"The change was so sudden I hardly dared to believe my senses; I, therefore, prayed the Lord to repeat to me the same things the second time; if needed, I might be sure of their truth, and might really tell the Saints to stay in Nauvoo, and continue to build the Temple.

"As I prayed thus, the same spirit burned in my bosom, and the Spirit of the Lord repeated to me the same message again. I then went on in my way rejoicing, and soon arrived in Nauvoo, and delivered this message both to the people and friends individually, and in the great congregation." (Autobiography of Parley P. Pratt, edited by his son, Parley P. Pratt, 1873).
Posted by James at 11:34 AM