062. The Archetypes of the Seven Churches of Christ

Book of Revelation chapters 2 and 3 includes a series of brief messages to each of the seven early churches of Christ in the Roman province of Asia. "Churches" in this context refers to the community, fellowships, or local congregations of Christians living in each city, and not to the building or buildings in which they may have gathered for worship. The message to each church begins with a characteristic of the Lord (who gives the revelation through John), and then includes a description of the positive as well as not so positive qualities of each of the churches, and concludes with a challenge and promise to those who overcome trials and tribulation. There are many commentaries in existence about the various levels of symbolism embedded in these messages and how they apply to the churches in the past, throughout time, and into today by way of prophecy. Below is a brief outline of the key characteristics of each of the seven churches. As you read these descriptions, ask yourself these questions:

Of which of these churches are you?
What are the characteristics that the Lord approves of in each of the churches?
What counsel does the Lord give to the various churches that could apply to you?

1. Church at Ephesus (Rev. 2:1-7)
Characteristic of Christ: He holds the seven stars in his right hand and walks in the midst of the seven golden candlesticks.
Commended: Dedicated, disciplined, and discerning. They were commended for their works and patience, they had detected and rejected false apostles, and had also rejected the deeds of Nicolaitans (many theories of who the Nicolaitans were have been put forth, but the most convincing in my mind is that they represented a movement to install a professional clerical class over the laity. In Greek, Nicolaitan literally means victory over the laity; see Wikipedia: Nicolaism).
Reprimanded: These saints were lacking in their love for the Lord with all their heart, might, mind, and strength (see previous post). They had left their first love, Christ, and lacked charity.
Counseled: Remember from where they are fallen and do the first works (faith, repentance, baptism, and seek the Holy Ghost).
Promise to those that overcome: "...will I give to eat of the tree of life, which is in the midst of the paradise of God." The fruit of the tree of life is the love of God. Those who keep the commandments, hold to the word of God, and are not led away and deceived will partake of this fruit.

2. Church at Smyrna (Rev. 2:8-11)
Characteristic of Christ: He is "the first and the last, which was dead, and is alive."
Commended: Faithful in suffering great tribulations, poverty, imprisonment, and persecution.
Reprimanded: None.
Counseled: Told not to fear, but have faith in the Lord. Promised a "crown of life" if they endured faithful until the end.
Promise to those that overcome: "shall not be hurt of the second death." Because of the atonement of Jesus Christ, they will overcome spiritual death.

3. Church at Pergamos (Rev. 2:12-17)
Characteristic of Christ: "he which hath the sharp sword with two edges;"
Commended: A few faithful followers were acknowledged for "holding fast my [the Lord's] name."
Reprimanded: Pergamos was a city filled with pagan beliefs and practices, and was referred to by the Lord as "Satan's seat". Temples dedicated to Zeus, Apollo, Athena, Asclepius (the healing cult) and Caesar dotted the city. The church had been compromised by idolatry, and accepted false teachings and those who promoted them. The Lord specifically singled out those who practiced the doctrine of Balaam (worship and idolatry of false gods, and fornication) and the Nicolaitan doctrine (idolatry of authoritarian leaders).
Counseled: Repent.
Promise to those that overcome: "...to eat of the hidden manna, and will give him a white stone, and in the stone a new name written, which no man knoweth saving he that receiveth it."

4. Church at Thyatira (modern Akhisar) (Rev. 2:18-28)
Characteristic of Christ: "eyes like unto a flame of fire, and his feet are like fine brass;"
Commended: The Lord recognizes their "works, and charity, and service, and faith, and ... patience".
Reprimanded: The church allowed a woman named Jezebel, who called herself a prophetess, to teach them things that lead to their committing fornication and engaging in idol worship. This led the people away from Christ. Jezebel and those that followed her were given a chance to repent, they did not, and they were promised “great tribulation”.
Counseled: Repent and hold on to what truth they have until the Lord comes.
Promise to those that overcome: "...power over the nations" and "the morning star".

5. Church at Sardis (Rev. 3:1-6)
Characteristic of Christ: "He that hath the seven Spirits of God, and the seven stars".
Commended: A few faithful followers were acknowledged "which have not defiled their garments; and they shall walk with me in white: for they are worthy".
Reprimanded: The church is mostly upbraided for being Christians in name only. They did not do much with the truth that they were given.
Counseled: Watch, strengthen those who remain faithful, hold fast to the truth, and repent.
Promise to those that overcome: "the same shall be clothed in white raiment; and I will not blot out his name out of the book of life, but I will confess his name before my Father, and before his angels."

6. Church at Philadelphia (Rev. 3:7-13)
Characteristic of Christ: "He that is holy, He that is true, He that hath the key of David, He that openeth, and no man shutteth; and shutteth, and no man openeth."
Commended: They are loved of the Lord as they have kept His word and have not denied His name. They did not compromise with the world and the false teachings surrounding them.
Reprimanded: None.
Counseled: Hold fast to the truth they had been given by God and let no one take their crown.
Promise to those that overcome: "...will I make a pillar in the temple of my God, and he shall go no more out: and I will write upon him the name of my God, and the name of the city of my God, which is new Jerusalem, which cometh down out of heaven from my God: and I will write upon him my new name."

7. Church at Laodicea (Rev. 3:14-21)
Characteristic of Christ: "the Amen, the faithful and true witness, the beginning of the creation of God".
Commended: None.
Reprimanded: The church in Laodicea was lacking in every way. Its doctrines had been compromised, and Christ was not in the people's hearts. The attitude of the people was "I am rich, and increased with goods, and have need of nothing." The church was not hot or cold, but only lukewarm, and therefore the Lord wanted to spit them out of His mouth. The Laodiceans were wealthy and independent people, yet they lacked a spiritual richness. The Lord referred to them as "wretched, and miserable, and poor, and blind, and naked".
Counseled: To counter these deficits, the Lord counsels these people to "buy of me gold tried in the fire", procure “white raiment" (garments) from Him that the shame of their nakedness might be covered. He tells them to repent and "anoint thine eyes" so that their spiritual sight could be restored.

Promise to those that overcome: "...will I grant to sit with me in my throne, even as I also overcame, and am set down with my Father in his throne". 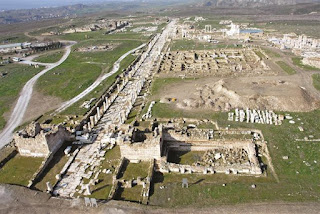 There are some interpretations of the seven churches described in these chapters as representing seven eras of Christianity, with the Laodicean era being the time period in which we currently live. From history, we learn that Laodicea was a very prosperous city, the wealthiest of the seven cities named in these chapters. It was a banking and financial center, as well as a center of "modern" fashion and medicine. Although the city was destroyed in 60AD by an earthquake, it was rebuilt by its citizens and made even more magnificent. These characteristics made Laodicea strongly independent, which was reflected in its name, which in Greek means "the people decide" or "the people judge". Its imposing fortifications gave the city the appearance of strength and promoted a feeling of security, yet its valley location and its exposed water supply made the city vulnerable.

However, the Christians of the church at Laodiceans were condemned by the Lord for their lukewarm attitude towards spiritual things. They had allowed the strength, wealth, and prosperity of their surroundings to make them indifferent and not dependent on God. Although this city was known for its vast wealth and power, the Lord urged the people to procure gold from Him, tried in the fire. Meaning to obtain truth and things of value from God Himself (such as promises) that cannot be corrupted, instead of relying on their own wits, strength, and understanding. Additionally, although the Laodiceans were known for their production of fine black wool clothing, the Lord called the people of His church in this city naked. He told them they were in need of white raiment, meaning they lacked the holiness the Lord wanted to provide to them. And although the Laodicean medical school was well known for its eye-salve, the people of Lord's church in this city were blind to their own spiritual condition, which was a lack of spiritual discernment. The Lord urged them to anoint their eyes with His eye-salve so that their spiritual sight and understanding could be restored. The church of Laodicea was sophisticated, self-sufficient, and trusted in their own wealth, numbers, and understanding. They appeared strong, stable, and unified on the outside, but were internally divided in how they lived out their spiritual lives. Their independence led them to unknowingly reject Jesus Christ because they followed the democratic ("people-deciding" or "people-judging") process of the Laodiceans in decisions about doctrine, organization, and governance, instead of relying on the spirit of revelation to guide them.

These messages to the seven churches should help us all to understand that just because you have accepted and begun to follow the truth, the path is not always easy. There are all forms of deceptions and distractions lying in wait to pull you away. An understanding of true doctrine may be compromised and a person may deviate from that which he was given. However, the Lord lovingly urges us to repent and seek Him out again. The Lord explains in these same chapters that "as many as I love, I rebuke and chasten: be zealous therefore, and repent." (Rev. 3:19). He provides a way back. As evidenced by His interactions with these seven churches, He has not given up on them. He is trying to work with them to bring them back into His fold. Indeed, He says to those of the church of Laodicea: "Behold, I stand at the door, and knock: if any man hear my voice, and open the door, I will come in to him, and will sup with him, and he with me." (Rev. 3:20). The same applies to you or anyone who has left their first love, Christ, followed after false doctrines or practices, not lived the gospel they were given, been lukewarm in terms of following after wealth, fame, talents, their own knowledge, or just plain stubbornly independent and not reliant on God. He wants to be invited back into your own life more than you probably want Him in your life. He stands at the door of your life and quietly knocks....but you have to open the door. Ask God to open your eyes so that you can see your own spiritual condition, and then repent of any complacency, compromise, materialism, and stubborn independence. Follow only the Lord Jesus Christ and do not risk losing your reward. To him or her that overcomes trials and tribulations, great promises are made. Those are real promises. Do not fear, do not give in, and do not give up.

Of which church are you?