104. The Mother Hawk: A Symbol of Charity

This Spring, a mother hawk constructed a nest on top of one of the Blue Spruce trees in our neighborhood, by far the tallest vantage point in the vicinity. The entire time she occupied her nest, this mother hawk was relentlessly dive-bombed and assailed by a group of resident crows. The crows would accompany the mother hawk on her every outing as she scouted for food, mercilessly assaulting her, chasing her, squawking at her. What’s more, other crows would squawk and dive-bomb the nest that held the defenseless hawkling as the mother was off on her errands. You could hear the hawkling cry out to its mother, probably both because of hunger, but also from fear as it was being attacked. It seemed like a very precarious and delicate situation.

However, I noticed the mother hawk was quite unphased at the attempts the crows made to drive her away. In fact, she seemed to resolutely pursue her course in her flight and other activities, almost as if the crows and their behavior were not even part of the mother hawk’s reality. It appeared that the crows could do no more than threaten, intimidate, instill fear, make a lot of noise, and bully. From what I could tell, the crows never actually touched the hawk nor its offspring. I was amazed at what I would call her patience or her endurance or her restraint, because it seemed to me that this mother hawk, with a gorgeously white underbelly, could easily latch on to the neck or wing of any or all of her assailants and tear them to pieces. For the mother hawk actually possessed the power to do exactly what her attackers were trying to do but could not do: she could have easily rampaged through all the trees in the area and killed every single crow and their offspring. Instead, she ignored them and lived her life and focused on her duty, which was to bring forth life, teach her young hawkling, and move forward in her cycle of creation. And so, if the crows made life exceedingly unpleasant for this hawk family, you would never know by how the hawks themselves behaved and responded.

In a fellowship meeting today the topic of charity was studied and a friend later helped me draw the connection to this episode with the mother hawk. The following was read from the glossary of the scriptures: “ …it doesn’t appear, from the example of Christ, that His willingness to die on behalf of others meant that He had to feel emotionally connected with them in order to do so. He forgave the Romans that were nailing Him to the cross — this was not the traditional definition of love. Instead, it was a commitment — a determination — to do good despite the opposition or hindrance of anyone else. The very people He went into the temple and provoked with His Woe unto you, scribes and Pharisees (Matthew 10) discourse (deliberately controlling the timing of their outrage so that He would be sacrificed at the appropriate time during the Passover), were the same people on whose behalf He also died. He was committed to giving His life to others as an act of charity, as an act of service, and as an act of kindness in a way that demonstrates what charity really is. Charity is a fixed determination to do something on the behalf of others. Whether they appreciate it, whether they love you in return or not, charity is simply doing what needs to be done. …  Living the kind of life that has charity, the pure love of Christ — in it is a determination; a vigor; a resolution; a firm, fixed determination to abide a certain standard, being committed to the wellbeing of one’s fellow man— even if one’s fellow man is not committed at all in a reciprocal way.”

This mother hawk pursued her course despite what the opposition consisted of. She was self-sacrificing. At some point the crows gave up and the squawking and dive-bombing ceased. The crows had failed in their efforts to drive off and thwart the mother hawk. The hawkling was now big enough to flap its wings, stand up in the nest, and use its beak to defend itself. One day, I could hear the call of the mother hawk not too far away in some trees behind our property. And then the return call from the young hawkling who was perched in the large tree in our yard. After some calling back and forth, the mother hawk swooped in and landed briefly on the branch above the hawkling, and then, to my surprise, she jumped from her branch directly on to the young hawkling, bumping it off its branch and forcing it into flight. The hawkling flew into another set of trees, called out to its mother, and she pursued. I observed the mother and her hawkling engaged in this type of behavior for several days as the mother seemed to be now chasing her hawkling from tree to tree. One might observe such isolated behavior and conclude that this was just a big hawk attacking a smaller hawk, but if the whole scenario had been observed it would be concluded that the mother hawk had a fixed determination to teach her offspring how to fly, land, and take flight again in order to grow and survive. The mother hawk was focused on her objective and did not show any interest in stopping until the hawkling had reached some level of ability. 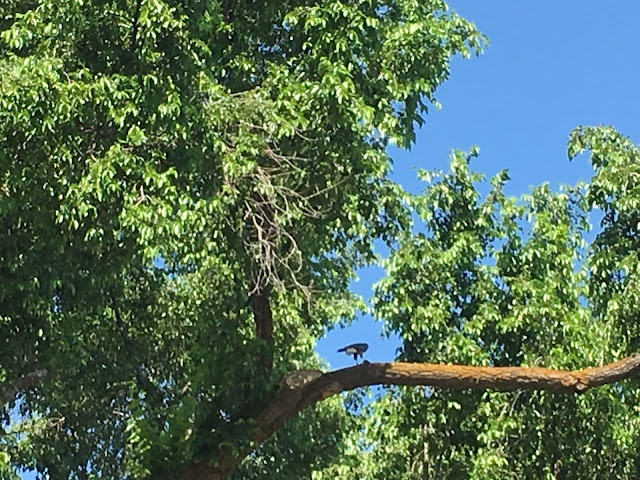 Sometimes in our lives, just after we have landed on a new branch or vista, and are taking in the view, satisfied with our accomplishment, we get pushed off, plunged into the air, and have to find another place to land. And then again it happens, and again. This experience with the hawk reminded me of the subtle presence of the Lion Aslan, or a lion figure, in many of CS Lewis’ fantasy books, who is sometimes heard purring in the background at moments when the lead protagonists are in need of comfort, sometimes appearing to teach certain characters, and at other times is seen only as a fierce silhouette, roaring, clawing, and chasing after other characters in an effort to drive them forward from dangers from which they were unaware or to teach them something about themselves, when to them it seems as if the Lion is intent on killing them. As the Lion spoke in “The Horse & His Boy”:

The Voice continued. “I was the lion who forced you to join with Aravis. I was the cat who comforted you among the houses of the dead. I was the lion who drove the jackals from you as you slept. I was the lion who gave the Horses the new strength of fear for the last mile so that you should reach King Lune in time. And I was the lion you do not remember who pushed the boat in which you lay, a child near death, so that it came to shore where a man sat, wakeful at midnight, to receive you.”
“Then it was you who wounded Aravis?”
“It was I.”
“But what for?”
“Child,” said the Voice, “I am telling you your story, not hers. I tell no one any story but his own.”
“Who are you?” asked Shasta.
“Myself,” said the Voice, very deep and low so that the earth shook: and again “Myself,” loud and clear and gay: and then the third time “Myself,” whispered so softly you could hardly hear it, and yet it seemed to come from all around you as if the leaves rustled with it.

This whole time I did not see the father Hawk. I had seen him in the Fall, together with his companion during their time of preparation.